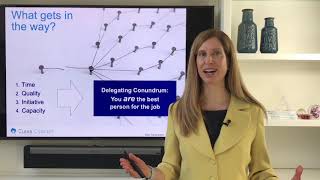 hereso excited to talk to you about delegating because as we all knowdelegating is a critical skill especially as we transition from theearly days in our career where we really made a name for ourselves by being agood doer but then transitioning into being agreat manager and these two things require a different skill set.

So whatI’d like to introduce to you is a framework to help you master delegationbut as we all know there are some things that get in the way when it comes todelegating.

I like to call this the delegating conundrum, which essentiallyis the fact, there’s no shame in saying this that you are the best person forthe job.

You’re the best person for the jobbecause you have worked hard, you are good at what you do, you’ve acquired alot of skills, a lot of experience and I don’t know about you but I was taughtearly in the day that you always ask “who’s the best person for the job?”and delegate the work to that person but if you find yourself thinking well,really it’s faster for me to do it, it’s more cost-effective or whatever the casemay be because you’re faster then we tend to hold on to work.

So, what I’d liketo do is walk through the most common challenges and how we can overcome those challenges of course the challenges break down into four things.

I don’thave the time to spend training someone.

Otherobstacles include that quality and initiative that other people may not beable to deliver or may not have because they’re not as experienced with thistype of work or as committed or motivated or excited about this type of work asyou are.

This project could be your baby and not everyone is going to bringthat level of enthusiasm around that type of work, so how do you overcome that? And then the fourth challenge that people have to address is capacity.

Yes,I’d love to delegate but everyone else is busy and they don’t have time tosupport me so the best way to address all of the last three is toleverage the art of delegating but now I’d like toshare how you overcome the fact that you’re too busy to train other people.

So, let’s talk about the time investment.

As I said, the first time you delegateit’s always faster to do it yourself so let’s say there’s a job that takes youlet’s call it three hours of work if you were to delegate it to someone else thenit’s probably still going to take you three hours of work because you’ve got to coach, review, work, edit, and meet with them repeatedly and it’s probably going to takethem six hours because this is perhaps one of the first times they’ve done thistype of work, they haven’t developed the efficiencies that you’ve developed overthe years, so if you look at this equation it doesn’t make sense todelegate.

But we have to think of delegating as long-term play.

The second, the third, fourth time you delegate, that’s where you start to get the pay-offin terms of freeing up your time to focus on other priorities, other corepriorities and even if they don’t ever get as fast as you, which is probablyunlikely though with more experience there’s a good chance that they’ll getway faster and better at the task with all due respect than you but we arethinking of the balance here in terms of the overall allocation of your team’sresources with turnaround.

Let’s say that three hour chunk of work isabsolutely something well within your skill set but because of your othercompeting demands on your time, other priorities, it’s going to take you five daysto turn that work around.

The first time you delegate, you don’t get any economies of scale.

It still takes five days to turn around because you’ve got to meet with that person review it, etc.

We’re not getting the pay-off the firsttime, so it’s the second, third, fourth time, that’s when we start to get thedelegating pay-off.