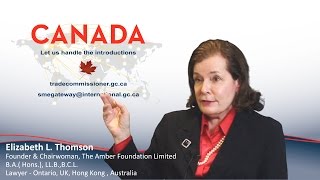 Most of the Hong Kongese like me are actuallytrilingual, meaning we’re fluent or native in Cantonese, Mandarin and English, and theseare basically the three languages you need to mingle around the region.

Let’s say lawyers, there’s no other placeon earth I see that has lawyers that are qualified in more than two jurisdictions.

But in HK you have U.

qualified, of courseEnglish qualified, then HK qualified, and sometimes you get China qualified, so youhave this global perspective.

So that’s very important to get your talenthere because you want a channel or a bridge that connects your needs and the local needs.

From the corporate structure perspective,it will be the Canadian company, the HK company then the Chinese company underneath.

That’d be the very typical structure.

Then different investors on the top layer,the Canadians and others will consolidate their investment on the HK level.

The HK level will take all the money and putthem together then apply to the Chinese company setup.

That’s the most typical structure now.

But I do see more of a trend of going directinvestment into China.

The Direct Import Program became very importantwhen the big-box chains decided that they also were going to go directly to the factories.

So they were going into China and set up theirbuying offices in Shenzhen or Dongguan.

They told their vendors in Canada and theUS: “We’re not going to issue any more international Letters of Credit, but onlydomestic ones.

” So the people who were then selling to themof which many were in Montreal, Winnipeg, … they had a huge problem, because theycouldn’t get paid by, say, Walmart, unless they had a HK company where they could acceptthe payment here.

We’d help them set up a HK limited companyfor them, which would then take over their vendor number with, say, Walmart, CanadianTire, Home Depot, Home Hardware, … Then Home Hardware would place the order with theHK company which is the subsidiary of the Canadian company, and XYZ HK, which we wouldrun and manage would then place the order on the factory in China.

The funds and profit would be made in HK andwould be taxed at HK rate, which again is significantly lower than the Chinese rate.

That would be effectively the Direct ImportProgram.

Why is it called Direct Import? Because the product actually goes directlyfrom the factory in Dongguan to Home Hardware depot where ever that might be, but all ofthe financial paper transactions happen in HK, and that is still quite a business forHK, for the service providers in HK.

I think in the next 10 to 20 years withinChina, there will be many opportunities for Canadian companies, especially in the cleantechnology and green technology sector.

If you look at China closely, they are actuallyundergoing a lot of thinking, and trying to also implement into policy on how to changeChina’s infrastructure, from transportation to hospital, medical to just simple as aircleaning.

I believe that and I see myself that Canadiancompanies have all of this.

It’s just that their potential is not fullyrealized in HK or China.

My best advice is very simple—one size doesn’tfit all! Any company should really do their homework.

The one thing I’d say is “Read, read,read! Ask, ask, ask!” They need to understand how the system works,and once understood, they need to come up with strategy to make it work.

They need to make sure that they’re lookingat what other people are doing, what the competitors are doing that are the same size.

You need to have a very clear business plan,short-term and long-term, and you need to also understand what your risk appetite is,your resource, and cash flow … all this must be thought through.

I have seen many Canadian companies who said:“I have a Chinese contact in China or HK.

They can set up everything and get the licenceand sell everything for me.

It’s a friend or it’s a relative.

There’s a Chinese person!” That’s the biggest mistake I’ve ever seen,because company formation, accounting, and all these matters are legal related.

You don’t want to do it wrong at the firsttime.

You want to do it right, because it’s costly,time-inefficient to correct them.

Many SMEs or larger companies in Canada havevery close working relationships with professionals.

But the problem with that is that a lot ofthe professionals handle domestic work, but don’t handle international work.

So I really suggest that you do your homeworkbut engage proper professional.

I’d definitely talk to the Trade CommissionerService, both in Ottawa and in HK and make sure that I was on their list.

I was talking to them, (and they have) greatdeal of information, great deal of expertise.

You, at yourperil, ignore HK as a gateway to doing business in Asia, and in fact the world.