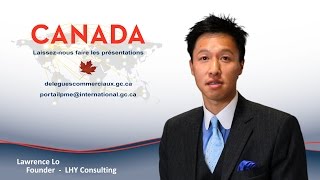 I have two parts of my business.

In the first part, I do corporate training.

That is etiquette training for Chinese andfor Westerners.

If I’m talking to Westerners, then I’mgiving pre-departure trainings, localization sensitivity training, and also how to succeedin business in China.

The second part of my business is actuallyrelated to my trainings because I’ve been a food and wine critic here in China since2008 and I do a lot of food and wine consulting for foreign businesses that are coming toChina.

I work with Italian companies, Chilean companiesand American companies that want to do business in China.

When I first came to China in 2002, I firstworked for a wine importing company.

Back in those times, selling wine in Chinawas actually quite easy.

I was actually in charge of the east Chinahotel and restaurant sector, and it was just a matter of selling wine to clients.

Nowadays, fast forward 13 or 14 years, themarketplace has many more players, many more wine importers in the market, especially infirst-tier cities.

So, the competition is intense and sellingwine is not as easy as before.

I would say that in the big-tier cities suchas Beijing, Shanghai and Guangzhou, the market is probably saturated.

However, I think that in the second-tier andthird-tier cities there are still opportunities.

Likewise, for food industries, back in 2002when I first came there weren’t that many imported food products.

I’ll just give you a prime example of avocadoes.

When I first came to Shanghai in 2002, buyingone avocado cost me about 80 yuan because it was all flown in, air freighted, and therewasn’t that much demand.

Until probably about 2009, when then marketopened, and now I would say 95% of the avocado market was from Mexico.

The price have dropped now and I can go tojust about any fruit stand to buy a reasonably good avocado for between ten to 13 kuai.

So, as you can see, in these 14 years themarket has changed a lot.

There are many more opportunities for importedfood or wine to come to China, but that’s not just for one country.

I would say it’s open to a lot of countriesthat want to come and do business in China, especially for those countries that have signedbilateral trade agreements with China who have a slight advantage in terms of importtax, etc.

compared to other countries that haven’t signed bilateral trade agreementsyet.

But, having said that, opportunities are thereand it’s just a matter of finding the right niche market.

There are a lot of foodand wine products that are coming into the Chinese market already, but I see a lack ofmarketing and education in the market.

Chinese consumers didn’t know what it was.

It’s just a bottle, usually 375 ml, butthey didn’t know what was inside.

They tasted it and they said it’s too sweet.

They didn’t know how it’s made and theytasted it once, and that was it.

I think there should be more educational informationabout these products as to drink it, for example, how to pair it with Chinese food.

In that sense, Chinese consumers won’t findit too sweet as when they drink it straight.

Or whether it should be chilled or drunk roomtemperature…these all make a difference as to the taste of the product.

For example, I’ve worked with Canada Beef,which is an organization that promotes Canadian beef in China.

They do a series of educational informationalsessions for the trade industry.

However, the opportunities that I see actuallyare not just in trade.

Obviously, it’s natural for them to touchthe trade industry first so that the chefs and hotels know what the products are, but,ultimately, the final consumers that are going to buy these products –how do you distinguishgrain-fed from grass-fed beef, what is sirloin versus rib eye, consumers are lacking in allthis product information and I think there are opportunities here not just in sellingyour product, but also in the information behind your product, the culture behind yourproduct, that would actually attract consumers to buy those products.

China is a big country, and regulationsand rules change all the time, especially when it concerns food and beverages.

So, I actually have been working with theCanadian Consulate here through their Trade Commissioner Service (TCS), they actuallyare the point of contact for any Canadian companies or clients that want to do businessin China.

As I said, rules and regulations and safetyissues change all the time, and the most updated information can probably be updated throughTCS.

They would be able to facilitate a betterunderstanding and easier and more efficient ways of entry into China.

If you’re just doing it on your own, thenit is quite difficult to obtain the latest rules and regulations, because these changeall the time and it can happen overnight.

If you’re not paying attention to that,your products can get stuck at port.

Worst case, if these are perishable productsthen they can rot or go beyond the sell by date, and then you’ve lost your product.

So, I think it is quite important to get yourpoint of contract through the Consulate or the Embassy in Beijing with TCS.

Food and beverage is the foundationof all cultures.

For example, in Canada you have maple syrup,smoked salmon and ice wine.

These products are not innate in Chinese culture,so I think it’s quite important to adapt your products to please the Chinese pallet.

For example, pairing ice wine with Chinesefood, how to work your smoked salmon into some kind of Chinese snack, or even maplesyrup.

One thing in Chinese cuisine that is quitedifferent from Western cuisine is dessert.

It is uncommon to see cakes and pastries inChinese cuisine.

So, when selling your maple syrup, would youwant to demo it to pair with pancakes or desserts, which is quite hard to relate to Chinese cuisine,or would you want to pair it with something else that the Chinese can relate to? I think that is the most important.

Texture-wise, I think for the Chinese palate,we are more nuanced into the texture of the food product.

For example, I would say abalone to the Chinese—wevalue that quite a lot—because the texture is quite chewy and, in the West, abalone isnot really worth anything.

So, as you can see in this example, the tasteand the texture is very different between Chinese cuisine and Western cuisine.

I think for any company marketing is veryimportant.

As I said before, there are so many importedproducts in China already, how do you distinguish your product from others.

Do you just hone in on one or two cities oris it feasible for SME’s to target the whole of China, which I don’t think it is.

The way of communicating your product to theend-user is very important, telling the story of your product, your brand story which isdifferent from other products.

That, in a way, will make sure that Chineseconsumers stick with your brand and not the other brand.

In summary, branding, the right way of communicating,finding the niche market in China are three things that are vital to the success of yourproducts and your entry into China.