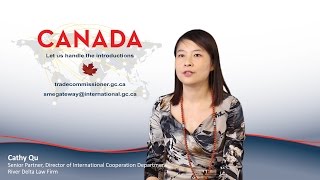 In principle, this law protects all kindsof employment relationship, such as part-time, full-time and dispatching.

But the pre-condition is, firstly, both partiesshould be qualified for establishment of the employment relationship.

For example, the employer must register inChina and the employee must be over 16 years old and under retirement age.

Of course the employer should pay salary tothe workers for their job.

If you have a representative office in China,according to the Chinese law, a rep office is not a legal entity, so it’s not allowedto hire people directly.

But it can still hire people by dispatching,which means you can cooperate with a qualified labour dispatching agency.

Another situation is that if you have a WFOEor joint venture in China, because according to Chinese law, these two types of companiesare legal entities, so they are allowed to hire people directly.

Firstly, the employer should sign a writtencontract within the first month of the employment relationship.

Secondly, as to the salary, social insurance,work condition and other benefits required by the law, the employer should meet the minimumstandard of every region, and also follow the terms and conditions agreed in the contract.

Apart from mandatory clauses, the employerand employee may also stipulate some other items, such as probation time, confidentialitytraining, supplementary insurance, welfare benefits and other items according to actualrequirements of different cases.