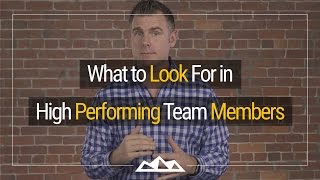 And I know they’re three and four but I can’t.

I mean I can’t even scare them anymore.

What to look for in high-performing teams? If you have no trust in your team, I get it.

I get it, that’s where you’re at today.

Maybe you don’t feel like they take any initiative whatsoever to step up and say like oh this is what we need to work on or you feel like you’re always micromanaging them and because of the lack of trust you’re like hey I need to report.

I need you to put everything inhere whatever it is I get the pain and the frustration, right? But I also know that if you doit right you can have a team that you’re crazy proud of, that are bringing to you more ideas about solutions to the problems that you didn’t even know existed that they proactively took on.

And you’re like you really get to a point where your editing, right? They’re doing the work, they’re executing the delivery on the customer, whatever you promised the market they’re doing for you and you just edit, you tweak.

Oh we don’t have budget for this.

Let’s hold off for now we’ll do it in Q3 but great suggestions and it just changes the dynamic of how you grow the business.

That is the opportunity, you know, I really learned this before I built my company Spheric because I kept trying to build these little companies.

They were never incorporated but it was a consultancy.

I mean I built a business was called WTF, what the future.

Com and I won’t get in the back story of what it was about but the truth is I started with a guy that was half interested and there was no team.

There was no testing them, recruiting, finding out if we’re a good fit together.

It was just like oh you can do this work let’s do something together and that never builds a strong team and what I see a lot of time with companies and clients that I coach is that they started with that approach and then all of a sudden they grow and now they’ve got to deal with this infrastructure.

It’s not a high performing team so I want to share with you guys today is my thoughts on six different characteristics that I look for when hiring.

I’ve been doing this now for over 20 years building and scaling companies and to me these are the non negotiables.

If the core team doesn’t have this then I can’t have them part of the team because I know that A players want to work with other A players.

They don’t want a C.

They’re not gonna accept somebody coming in the business and not meeting them at their level, right? They want to be inspired by working with people that teach them new things, right? So the first thing is you want somebody takes initiative.

Somebody that doesn’t wait to be told what to do.

In the world there’s two types of people.

They don’t sit back and be like nobody asked me to do anything so I’m just gonna sit here.

That’s the way they work.

When I talk to and entrepreneur one of the questions I ask them, do you want to build a world-class company? ‘Cause if you don’t I can’t help you.

That’s not my style, that’s not how I roll.

It’s the same for my team.

I want to make sure that the people even in their own life, whatever their passions are, they have a pursuit for that passion.

Even if during the day they work with me on a specific project I want to know that they in the way they approach life has a strive for excellence.

That’s not something you can coach.

It’s either natively there or it’s not.

You know, you can, it’s really simple.

You can talk to somebody and be like hey this is what’s going on in my life, see how they react.

I need people that get excited by the opportunity to create an outcome, to create a solution.

Transparency means look here’s what I’m working with, here’s the numbers, here’s my project, here’s the team, here’s where I feel the challenges are.

They’re honest, right? They’re not complaining, they’re just being open and transparent especially among the team.

There’s no reason to hold things close to the chest.

It may be they, you know I’ve seen this so many times working on projects and I’m like hey what are your tasks? What are your to-do list look like? And they’re like oh, well I’m working on this.

And they get to this point where they’re like holding back and I’m like what are you holding back from? If you, if we don’t have the trust, if you’re not willing to be transparent with me then that’s a thing we need to solve.

Because at the end of the day we’re an organization, we’re a company, we have a mission.

We want to deliver for our customers and the more information that’s available,I run an open book company.

I’m not saying that everybody should know everybody’s salaries.

What I’m saying everybody should understand how the business makes money and that transparency starts with the leader and you want to hire people that also share in that desire, right? You want them, that their default state is to share information not hold it close to the chest.

Alright, there’s nothing that will frustrate me more than to be like oh what’s the problem, this is solution, great.

What are we gonna do about it? It’s like where is the excitement to knock it out of the park? Where is that excitement to jump out of bed to get it done? That sense of urgency is not again something you can teach people.

They either find challenges and they step up or they look at problems and they just sit there like a deer in the headlight.

And it’s like what did you think would happen with this problem? Do you think you’re just gonna resolve itself? They have no sense of urgency.

There’s ways the test for this but at the end of the day these are the characteristics that I think are super important.

The last one I want to share with you is customer empathy.

If people don’t want to love and the customer that’s why look at it when I think of my businesses that I’m involved and I always ask my team can you please love on the customer? At the end of the day the purpose of a business is to create a customer that creates a customer.

It’s to create, deliver and capture value for customer.

There is no business without a customer, right? A profitable customer I might add but you want teammates that have empathy for the customer than just love on them.

If you guys ever had the privilege of interacting with her she’s incredible.

That is, when I think of like the best example of customer I think of Stephanie.

I mean the other day I was looking at feedback form for an event we did in Toronto and in the feedback form is like what was best for the event? The fact that Stephanie hugged everybody that came in the room for the event and I’m sitting there going I was in the green room I’m going did she really hug every person that came? There’s 100+ people at this event and I messaged her I was like Stephanie is it possible that you hugged everybody that came in the room?She’s like yes, why? And I was like that’s crazy that’s what I’m talking about.

I think there’s there’s probably some HR violations there but she did it and and it was appreciated and I think that that’s what you want is you want people again that take initiative, right? That are not gonna stand by, they’re willing to take initiative.

They have a bias for solution that when they see a problem, they default to solution not more problems they are transparent.

They’re open, they don’t hold their cards close to their chest.

They over-share so that there’s more information for the rest of the team to make better decisions.

They have a sense of urgency when they approach problems.

They don’t sit back, wait for somebody else to deal with it.

They’re the first ones there.

They’re urgent about addressing problems and then finally they have customer empathy.

Those are the characteristics of high-performing teams that are probably totally different than what you’re doing or how you’re hiring right now.

If you have great people on your team you know them I was or transitioning the other people off finding those great people and say how can we find more people like you because you embody what I want to do or how I want work and who I want to work with in my company.

So as per usual, I want to challenge you to live a bigger life and build a better team in this week’s video, I’ll see you next Monday.

If you liked this video be sure to subscribe to my channel to get weekly updates also encourage you to join my newsletter where I share exclusive invites to events and other free training videos and if you’re ready to get going I got a couple more queued up for you now.