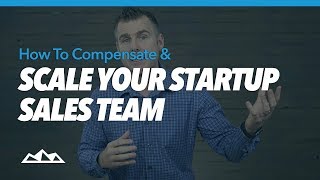 In this video, I'm gonna share with you the five steps to compensating and scaling your startup sales team, specifically around hiring efficiently, managing the expectations for comp structures, and growing your team.

Now be sure to stay to the end where I'm gonna share with you an exclusive video on building your sales engine.

(upbeat music) So when you start building out your sales team, maybe you're worried that you're doing it wrong, that you're probably gonna put yourself in a hole, or that the person that you hire isn't gonna feel motivated enough to really sell the product.

Maybe the pricing hasn't been figured out.

What I want to share today are the five steps to get you to a point where you feel confident that you're moving towards the right direction to build a fair comp structure for your sales team where they can feel value added, covered, and also feel like they have room to grow within your business.

Step one, paying a base salary.

Now I really think it'simportant when you hire salespeople to cover some level of base salary.

I know there is days and areas where you can pay somebody commission-only, and have a churn-and-burnculture, but as I've seen, as I've worked on personallyscaling my own sales teams, and helping my clients that I coach scale to 150 salespeople plus is having that base really allow somebody to feel confident that as you're investing in them, learning, training, and growing that they don't have to worry month to month.

The last thing you want to do is invest in somebodyfor a couple of months only having them leave because financially, they can't afford to keep on that track.

When you start off in sales, it's really important to have a target because you want to know like what are the expectations for me.

When I'm playing a game of soccer, I want to know what's the scoring structure, where is the goal, what's the rules of the game so that I understand what my target is, and the same thing is for sales, understanding my quota gives me that mark.

Now when you're starting off, there is a good chance that you're not gonna hit that but at least you understand what percentage of quota that you're hitting,and over time, you want to keep having that percentage go up and up, so it's really important that as a founder, you set that quota for your sales team based on your industry andthe pricing of your product.

This means that a percentage of their pay is based off of sales that they're making.

Typically that falls around 10%, so whatever they sell on a monthly basis, they're getting 10% added on top of their base salary so that they have targets,so quota would be 100%.

They know that as they grow their sales revenue, they're gonna get paid abigger, bigger commission check.

It's important to align theiractivities with incentives that drive the business forward, so having that variablestructure is the way to do that.

As a rep grows and hits a higherpercentage of their quota, eventually there's gonna be a magical day where they hit 100% or higher, and what you want to do is you want to give them an incentive to do that, and the way you do that is through an accelerator.

Typically 15% is what I've seen, so essentially if they're at 10% sales in a variable comp structure,once they hit 100% plus, they get 15% on the previous sales, and any more they do ahead of that so that they're feelingmotivated to not only hit quota but to crush it, so you want to do that through an accelerator mechanism.

Now it's gonna be different for every kind of company but typically if you've got 10 sales rep, then you can afford to hire a sales manager, and what you want to do isyou want to set their quota because they got to kinda perform at 80% of the quota for their sales team, and allow them to manage.

Manage means setting up a training structure, really coaching their new hires, making sure that their reps are becoming efficient, and continue growing theirquota structure, hiring, firing, setting those expectations, refining the pricing model, ensuring that the reps are pushing the right products that have the highest grossmargin within your company.

The way I think about it isthat if you can get a new rep up to speed within six months.

Let's say 80% of quota within six months, and you want to keep hiringbecause that's a great trend, and that's what you want to hold your manager to.

One, make sure you pay a base salary.

Two, set a quota for them to hit.

Three, have a variable componentof their comp structure.

Four, have accelerators that gets them excited about growing.

Five, hire a manager at scale so that you can manage your salespeople, get 'em efficient, and keep growing your business.

As I mentioned, I have an exclusive video linked up below on the threeforces of the sales pipeline.

If you want to watch that,just click that below.

It's an exclusive for you.

As per usual, I want to challenge you to live a bigger life,and a bigger business.

Thanks for watching, and I'll see you next week.