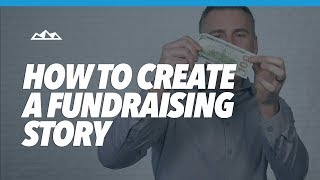 In this video, I'mgoing to teach you how to go boom, raise somemoney, more than $100.

But I'm going to teach youhow to create a fundraising narrative to helpyour fundraising process be super-easy, andbe sure to stay till the end where I'm going to share withyou an exclusive resource called my "FundraisingLike a Pro" training, which I break down thethree phases of fundraising and tell you exactlyhow to reach out and get connected to investors.

[MUSIC PLAYING] So the other day, Iwas on a growth session with a potential coaching clientnamed Rodrigo in San Francisco, and he asked me.

He's like, hey, we're aboutto raise some funding, but I don't understand kind oflike what do investors look for and how do I create theprocess and how do I make it so that it is– it's easy, and I don't spendsix to nine months out there in the market trying toraise little bits of money from a bunch of people.

And it was sucha great question, that I actually walkedhim through the things that I think need to bepresent to actually create a fast and momentum-drivenfundraising process, and really,the narrative, the story that you kind of want tocraft to get investors excited about your startup.

You know, I've beensuper-fortunate to have raised money twice for my lasttwo companies, Flowtown.

Com and Clarity, from some of thetop investors in the Valley, so Steve Anderson from BaselineVentures and Freestyle Capital and just some amazing dudes.

And what I've learned inhelping other entrepreneurs raise over $150million of capital for themselves isthere's definitely a process around the storyarc in the narrative.

And that's what I want toshare with you in this video.

This is the big idea.

There are two times– the best times– to raisemoney for your startup, before you'republicly available, and after you figure it all out.

Because here's what'snormal in a startup world, is, before you launch, you'vegot some early traction and customers using it.

Maybe you're in private beta.

That's the best way to do that.

And that's just usuallynot what happens.

What happens is it kind ofgoes up, and then it flattens, and it comes down.

You have churn issues, andyou have monetization issues, you have product hook issues.

And all these thingsthat aren't working out, and you work your butt off forlike another year and a half.

And then finally, you get toa level of product market fit where the product comes backand there's more traction.

Now, there's twoof the best times to raise is before you'republicly available, and after you figure it all out.

So what I would say,if you're early stage, is keep the productin private beta.

Have a way forpeople to subscribe to be notified when you openup to the public, and that way, you can create alot of excitement for what the potentialcould be around your product and traction in themarket so that investors can feel like they're in early.

Now if you've alreadylaunched, unfortunately, you've got to go all the way throughthat trough of challenges and get on the other side.

And at that point whereyou feel like you're starting to getthat growth curve, you can get investorsback excited.

So I hate to be theburster of bubbles, but if you've alreadylaunched, you kind of got to go over here.

If you haven't launchedyet, use that strategy.

OK, so most peopledon't realize that.

This is where youactually start doing the research for who arethe best investors, who are the entrepreneurs thatcan get you introduced to those investors, andmake sure that you time it– the sequence, to createmomentum in the conversations and that you're like– you'reliterally meeting with one investor and maybe two orthree investors in the morning, and two or threein the afternoon.

And you're going maybe to SanFrancisco and Boston and New York in a way that'svery strategic to create a bunch of buzz.

Because investorstalk to each other.

Especially if you're doingan early-stage round, you want to makesure that you get, you know, maybe one leadand a bunch of other people to help fill out thecomposition of your fundraising.

So to me, thepre-marketing phase is how you create a narrative,or a conversation in the market to get people excited.

And that is aroundthe research of– and I'll give youthe first step is, only raise money from peoplethat understand your industry or understand the problemthat you're solving.

Too many people arepitching investors that don't know B2BSaaS, or, if you're in mobile apps orfinance fintech or whatever it is for you.

And they'll take themeeting because they want to learn andmeet great founders, but they probably wouldnever have invested.

So there's a wholestrategy around that.

Again, I'm going toshow you how to get the "Fundraising Like a Pro"training to teach you how to go through that filtering process.

But make sure that youallocate at least six weeks to the pre-marketingphase of research, connecting with entrepreneursthat have raised money from those investors, andhaving those conversations way before you ever decide tostart raising money officially.

Now this is not– I'm going to preface thisby saying this is not to be deceiving orscrew with the numbers or lie about any levelof traction you've had.

All I'm saying is that there isa way to create a hockey stick.

And the way thisworks, especially if you're not public yet, orif you can time or sequence your partnershipsor whatever growth.

You know, if you'reinvesting in paid acquisition and you know you have achannel that that's performing, you can sequence thegrowth curve to ramp up.

And I think this is whata lot of accelerators do.

I know that I've heardstories at Y Combinator where they pretty much say look.

Your goal is to buildthis growth curve and just make sure that itcontinues to grow over time.

So how do youmanufacture traction? Well, if you've gota list of beta users that have subscribedto be notified when you open up theproduct, well then, it makes a lot of sense.

If you know you'regoing to raise, you know, three months fromnow, to slowly ramp up.

Let them in the product.

Let them use it.

Get some conversions to pay.

And what you do, and it's look.

It's just– it's reality.

And you can do thatwith partnerships, so you can like sequencethe partnerships in a way where it kind ofbuilds that momentum.

And this is what alot of accelerators teach their founders to do,because it just looks better as a story, as afundraising narrative, and it's something thatyou have control over.

So definitely recommendthat you do that, so that when you go tothe market, you've got that built out.

Just don't do it ina way that if you don't have enoughkind of gas to sustain that, then all of a suddenyou have a huge dip.

And then you're tryingto talk to investors, because they're going to askwhat happened on that dip.

So here's the deal.

Most investors at the earlystage will always say, I invest in the person,not the product.

And the reason why, isat the end of the day, the product more thanlikely will pivot and shift.

I mean, this is true forevery one of the companies I've built, and many of thecompanies I've invested in, over 40 companies, Intercom,Hootsuite, UNBALANCE.

And even though the coreproblem they were solving may not have shifted,but the product did.

What was always true andconsistent was the people.

So the way I thinkabout the team story is, if there's anychallenges in your business, maybe you guys don'tcome from the industry, or you've never starteda company before, or you're attacking a marketthat typically only sells to mid-market or enterpriseand you guys have never done that before.

Whatever the objectionsyou think an investor might have around yourteam and experience, you want to overcomethat with advisors, OK? Or, make sure that if youknow that there's an objection they might have, andyou have a great answer from a team point of view.

Maybe they're like, well,you've never scaled this company to 100 million users.

And you're like,no, but our CTO has.

That's the kindof thing where you want to make surethat in the narrative, in the conversation, that youfront load into that talking with investors.

So the way I thinkabout it is, you want to list all the weakpoints of the business model, your team, theexperience, and then fine advisors or frontload conversations about the specificcharacteristics of members on your team so thatyou can overcome that.

So it just slowlytakes– kind of mean, the truth is, is investors wantto de-risk the opportunity.

OK? They would love to invest infast traction, high growth, big market, bigopportunity, a clear outcome for either publicoffering or exit, and they want to makesure that there's little to no risk in regards towhere you are in early stages, where you're attoday, and who's going to fund you in your next round.

And that's the wayI think about it.

The team story needsto be rock solid, and that's the wayyou overcome that.

So quick recap, foursteps to creating a rock-solid fundraisingnarrative for your startup.

One, make sure youpick the right two peaks, before youlaunch publicly or after you'vefigured it all out.

Three, manufacturetraction in a way that shows a growth curve,and four, ensure that you have an incrediblypowerful team story to get investors excitedabout your business.

As I mentioned earlier,I want to share with you an incredible resource calledthe "Fundraising Like a Pro" training.

It's something I created afew years ago for my portfolio companies.

You know, I've invested aton of software businesses, and they're always goingthrough a fundraising process, so I want to givethem my strategies that I've done to fundraise inmy last two companies faster.

6 million in seven days, and I break down thatstrategy in that training.

If there's anybodythat you care about, you think thisvideo could serve, feel free to share with themdirectly, and as per usual, I want to challenge you to livea bigger business and a better life, and I'll seeyou next Monday.

Hard to get the money,the money, money.

Startup Finance Part 1 – How to Determine the Ask Amount