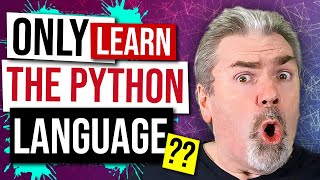 A question I've been asked a lot recently is is it worth learning any other programming language given that Python is now so dominant in areas such as AI and machine learning? Let's address that in today's video.

This video is brought to you by the Learn Programming Academy's Python masterclass.

Join close to 120,000 students and get 42 hours of video training which will teach you Python the right way.

Grab a massive discount and instant access by visiting lpa.

Dev/YoutubePython or by clicking on the link in the description of this video.

And again, this is a question that I get asked relatively often, and suddenly I've noticed in the last few weeks, few weeks to few months, I'm getting that question asked more and more.

So firstly, let's address it quickly.

Yes, it's worth learning other programming languages.

Python is not the only language to learn.

It's great for certain areas of computing, but I wouldn't say that Python is a great language for absolutely everything.

Certainly it's got its uses, and the examples I used at the start of the video is AI, artificial intelligence, and machine learning; two areas that Python is really quite dominant in.

And look, it's a good all-round purpose language, but the great thing about the world we are living in today, it's a diverse world, and that equates also into being diverse in a range of computing applications.

So, there's so many opportunities out there for developers, not just Python developers.

So, if you're a Java developer, a C# developer, C++, C, Kotlin, there's development opportunities there for you.

So, I'm not suggesting by that you pick a really obscure language that is something like Haskell, that unfortunately hasn't got much support.

That probably wouldn't be a good idea for you to pick up as a mainstream language, because you're gonna struggle to find job opportunities because there's going to be nowhere near as many jobs available for you in that programming language as opposed to, say, Python or Java.

So, in general, I would say certainly don't assume you only need to learn Python, and it should depend, to a degree, on what your goals are.

So, what are you trying to do? Have you figured out, do you wanna get into artificial intelligence? If so, you're sure of that, then yes, maybe Python's a good vehicle to get into that goal.

But look, Java's quite dominant in the artificial intelligence and machine learning space, as well.

Also a good language, but perhaps at the moment Python's a bit more popular in that space, but have a think about what your goals are because that should then dictate which programming language you ultimately go for.

These days, I would certainly not recommend you just assume that Python's gonna be there for everything, and actually getting some knowledge in a variety of programming languages can be a good thing, but of course, but that said, don't spread yourself too thin, particularly if you're starting out.

I think if you stuck to mainstream programming languages, Python and Java would be two good ones, and perhaps C++ if you're moving more into a game-related field or an application field that's using that language, that would be another good choice.

But these days, instead in 2019, I don't think you can go wrong focusing on Java and Python.

Both of those languages will give you great opportunities and I think you can be quite safe targeting either of those as a first or second level language.

Alrighty, so I hope that helped.

If you've got any questions, feel free to leave a comment and I'll get back to you.

If you're ready to look at the next tip, click on up here and you can check that out.

Consider subscribing by clicking on the link up here, and I'll see you soon.