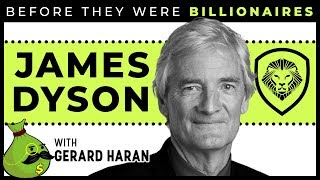 James Dyson – Before They Were Billionaires. Gerard Haran tells us the facts and story.

About: Sir James Dyson OM CBE FRS FREng is a British inventor, industrial design engineer and founder of the Dyson company. Traditionally, he was best known as the inventor of the Dual Cyclone bagless vacuum cleaner, which works on the principle of cyclonic separation.