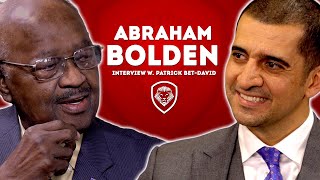 In this Abraham Bolden interview with Patrick Bet-David, they sit and chat about what it was like to be the first African American secret service agent appointed by John F. Kennedy and whether the JFK assassination was an inside job or not? Subscribe for more awesome interviews –

Abraham W. Bolden (born January 19, 1935) is an American former United States Secret Service agent – the first African-American Secret Service agent assigned to the Presidential Protective Division, appointed by John F. Kennedy in 1961. Bolden was fired from the Secret Service after he was charged in 1964 with accepting a bribe in relation to a counterfeiting case he was involved with. He was ultimately sentenced to six years in prison.