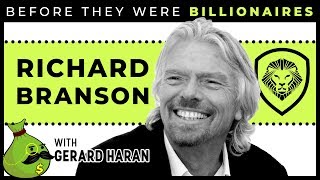 Richard Branson – Before They Were Billionaires with host Gerard Haran. Subscribe to Valuetainment:

About Richard Branson: Sir Richard Charles Nicholas Branson is an English business magnate, investor, author and philanthropist. He founded the Virgin Group, which controls more than 400 companies. Branson expressed his desire to become an entrepreneur at a young age.

33 Comments on “Richard Branson – Before They Were Billionaires”