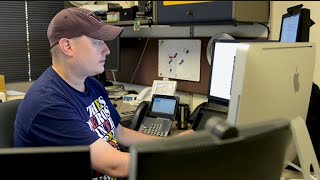 [Eric]When you talk about learning programming, obviously you could go with the self-taughtroute or you go with the certificate.

And I started with the self-taught route,but you always wondered that you're missing something, that maybe there's something that'snot, fundamentally, that would've helped you along the way, but you're just missing it.

[Ryan]I had done some classes back in Tennessee, but they were university level so they werea little bit more conceptual.

I really wanted to be able to get the skillsto make an application from start to finish and have something to show for it.

So the format is actually structured in threequarters.

Each quarter is 10 weeks.

[Ryan]The idea is that when you’re done with those nine months you actually have the skills tocreate, you know, applications with the given programming language.

[Ryan]The instructors for the certificate, they've been, for Java in particular, they've beendoing Java since it came out as a programming language.

So, I think the depth of their knowledge issomething that you don't have at your disposal when you're learning on your own.

[Ryan]I think most people's goals coming into certificates like this are focused on, how can this benefitmy career? And I think that, you know, learning theseskills that the certificates teach you will be immediately applicable to a computer sciencecareer.

[Eric]So if somebody is just reading your resume, it's hard for them to gauge the quality ofyour work.

And having a university-backed certificateprogram really helps to get you that stamp of approval, and maybe it will get you inthe door.

[Eric]I think the network engineering is undergoing this paradigm shift that you need to havesome sort of programming under your belt.

It doesn't have to be Python.

But I would definitely recommend the programmingexperience under your belts – and one of the best sources, obviously, the most reputableuniversity in the region, which is University of Washington.