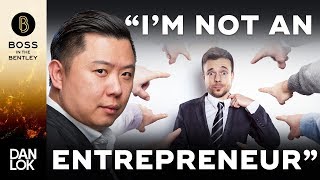 – What do you do if you don'twant to be an entrepreneur? One of the most commonquestions I get from you, from my fans from all around the world.

Dan, how should I get started? What's the first step? How do I start my first business? What would it take to be an entrepreneur? First of all, let me say this.

Not everyone is suitableto be an entrepreneur.

Well you don't have to be anentrepreneur to be wealthy, to be financially successful, because not everyone is cutout to be an entrepreneur.

Unlike other gurus and allthese other people that say, oh yeah, yes if you just hustle, anyone can make it as an entrepreneur.

It's like if you hustle everyone will be an NBA player.

It takes a certain personality type.

It takes a certain psychological makeup to be an entrepreneur.

I used to believe, thatentrepreneur is made.

You could develop skillsets of an entrepreneur, and you can get to a certain level.

You can have fun, you canget to a certain level.

But only a percentage,not even a big percentage, will make it to that professional level.

Will make it to that college basketball or to the NBA, the bestof the best in the world.

So I think its very naive,it's fucking stupid to believe, that everyone can be asuccessful entrepreneur.

I don't believe in that.

Timing, team, idea, execution, all those things, they play a factor.

So what do you do if you don'twant to be an entrepreneur? Let me tell you about my friend Ron.

He is one of the highestpaid photographer in my city.

He takes a lot of different photos.

One of the most expensive in my city.

Now he doesn't have a business.

What Ron has is a high income skill.

If you follow my work you know I believe in the power of havingthe high income skill.

And I define a high income skill as a skill that makes youa minimum $10,000 a month.

So Ron has a high income skill, which is a high-end photographer.

Remember back then hecould've bought a place, a house in Burnaby, he'smaking very good money, but he bought a very modest home.

Not for a lot of money, and him, his wife, and two kids living there.

And as he keeps makingmore and more money, he put aside and saved thosemoney and put into real estate.

He started off buying smaller property, fixing them, flipping them, selling them.

And today, after all these years, he owns over 200 units in Vancouver.

Now if you know Vancouver real estate, it is one of the mostexpensive in the world.

So he owns apartment buildings, he owns commercial properties.

He doesn't have a business.

He is not a business owner.

In this case, real estate, that's it.

He's basically retired,traveling with the wife, and traveling to all kinds ofcountries just enjoying life.

Because, every monthhe's got rental income coming in, right.

So I want you to think about, you don't need to be an entrepreneur to be successful financially.

Now, if you have your high income skills, could you then transition, if you do want to start a business, and if you do believe thatyou have what it takes, you could do that, absolutely.

But what I'm saying is, youcould do very well financially.

You can make six figure a year.

You can make seven figure income a year with the high income skills without ever starting a business.

Because, starting a business is a completely different thing.

Now you have people, you have systems, you have infrastructure.

It's much more complex and again not everyoneis cut out for that.

And I always describe thedefinition of entrepreneur is a person with a vision whoorchestrates other peoples' time, resources, and money,to make his or her vision a reality, that's it.

Not everyone is capable to do that.

Not everyone is capable of being a leader.

So don't fool yourself,and say oh I can do that.

It's like, you see MichaelJordan playing basketball, oh I'm gonna be an NBA player.

The chances of you makingit are slim to none.

The great thing is youdon't need to do that in order to do well in life.

You don't need to do that in order — If you want to watch my other videos on five ways to increase your income, click on the "i" button, I talk about the concept of also intrapreneurship.

I explain very much indepth in that video.

So, if you want to developyour high income skill, click on link below, join my global communitycalled Dan on Demand.

Now with Dan on Demand every single month I'm gonna teach a class worldwide to all my students fromall over the world.

Every single month, 'cause Iget questions from you a lot, Dan when can I attend your next workshop? Dan when can I come toVancouver to your training? I'm not doing training anymore.

Every single year I only do one huge event which we just finished withover a thousand of my students from all over the world.

I rarely do that, because I don't make my fucking money as a speaker.

I make my money building companies.

That's why you don't see me flying and traveling around doing all that.

If I do all that I would not have no time running my business.

So if you want to learn fromme you do not need to wait.

Join my Dan on Demand community.

Every single month,I'll teach a live class virtually so you can join me as well.

Until next time, I'llsee you in my Bentley. 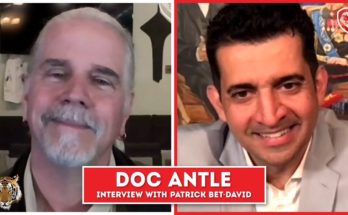