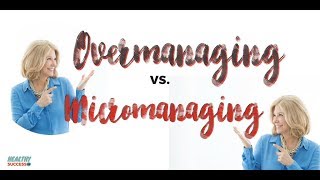 Hi, today I am at the National WBENCconference where business owners from all over the country are converging upon the city of Detroit to really, really focus on the role of women in business and diversity within the corporate pipeline and other things like that.

And one of the cool experiences that I've had since I've been here, day one basically at thisconference, is I got to go to a great talk by Disney and the talk was the DisneyExperience: Leading With Values, and I want to share with you what their very first slide of this presentation said because it really ties into something that I think issuper important and that is, "Disney's consistent business results are driven by strategically focusing on certain business functions and opportunities which companies often fail to see the value and potential of and that is a key source of what differentiates us.

We have learned to be intentional where others may be unintentional.

Now, I don't know what the exact definitions of overmanaging versus micromanaging are, but what I could tell you is what I see it as, and based in this concept ofintentionality.

So, micromanaging is when you literally are over somebody's back, telling them what to do, not letting them think forthemselves, not giving them the freedom to work on a problem and solve it of their own volition, and using their own brain, and not to be able to have thefreedom to do the work in the way that best suits them as long as it gets done.

That is my sort of version of micromanaging.

The difference with overmanaging is really, though, taking and saying what is the experience or what is the situation that we're trying to be excellent in? And how can we look at all the details of that and improve upon them? So, what was the experience that he was doing? It was the boat.

What'sthat called? So, in this example they were talking about when Walt Disney went on the Jungle Cruise which is atactually Disney Land, and the guy who was in charge of that, when Walt Disney got off the boat he was not happy, and he said, "This was supposed to be a sevenminute ride.

" And there's more to it than that, but that's the gist, right? And so, his leader who was responsible forthat ride said, "Let's go and you show me all the things thatyou'd like to see in this.

" And so WaltDisney went on that ride with him.

They spent an hour at least, and he told him every single detail of how he wanted that to be.

And in the course of doing that what ended up happening was he took back that information and created that seven minuteexperience based on Walt Disney's expectations and his overmanaging the situation.

Now, the key to this, though, is once Walt Disney told his leader what he wanted, he stepped away and let him create it, let him do it.

He had three weeks to figure it all out, and when WaltDisney got back on that ride, took the ride around again, he was happy because everything that he wantedwas implemented.

The overmanaging wasreally saying, "Here's what my every single iota of expectation is, and this is exactly what my vision is.

Now, I'm going to trust you to gomake it happen.

" And so, you know, that I think is one of thekey differentiators that Disney brings to the table, is that, that's how they create excellence in their product.

That is why they are a marketleader.

That is why everybody knows to expect, when you go to Disney, to have a great experience, but because they have this culture of overmanaging but not micromanaging.

So, I really loved this.

It really resonated with me.

And I think it resonates with people especially if you feellike you've been micromanaged in thepast, but there is that balance, right? So, I would love to hear your experience with this.

Have you been overmanaged or micromanaged in the past? How did it make you feel? I'd love to hear your experiences with this in the comments.