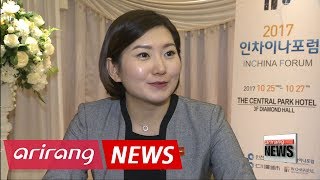 But in South Korea's only official Chinatown,in the port city of Incheon, a business forum was held this week to support business andhelp them overcome the current difficulties in bilateral ties.

The dispute over THAAD has taken its tollon the business environment for Korean firms with interests in China.

Lotte Group has had to begin withdrawing fromthe country, and according to figures released by the Korean central bank, investment inChina by Korean firms fell over 40 percent in the first seven months of this year.

To try and revitalize the deteriorating businessrelationship between the two countries, the city of Incheon has gathered academics andbusiness experts from Korea and China.

The 2017 INCHINA FORUM aims at creating morebusiness opportunities, going beyond the simple import-export model to try and establish deeperexchange.

Forum organizers have invited more than 250people from China and another 250 from Korea, to share their views on a variety of businesstopics from start-ups to big data, under the motto of 'hao-peng-you', or 'good friend'.

(ENGLISH)"So we invite them here without thinking about political reason, 'Friend is Friend', so thatby doing so, we wish to renew friendship as well as deepening human network and wideninghuman network through this kind of event" The Forum, which goes on until Friday, wasalso designed to create a model of interchange and business development with China by jointlyexploring effective business models, hoping to boost economic exchange amid the currentdifficult business environment.

I am looking forward a long term relationship" (STANDUP)"Despite the current THAAD dispute, the organizers of this forum hope it can start to repairthe relationship between the two countries and lead to a brighter future.