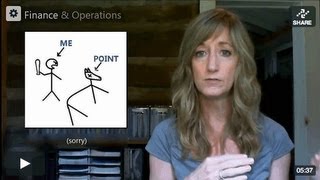 hi and Kathy thanks for watching thefifth and actually fifth and sixth video and Working for Wonka how to write abusiness plan series.

in this video were combining the financein the operation section into one video.

And we're going to start with thefinancial section.

now the finance section is really where the rubber meets the road.

this is one of the most important sections as your business plan because this iswhat's proving that your company is a financially viable venture.

if maybenot and maybe not lucrative in year one oryear two.

but you're proving out that there isactually a potential for this business to make money.

and you're proving how much money over what period of time.

in yourfinancial section you want to include revenue model.

you can include cash flowstatement, earnings statement, and balance sheet, any loan or vendor deals that areaffecting the financial future of this company should also be included in this section.

But here's what I'm gonna say about allthose documents I am NOT a professional financialadvisors.

so I don't want to mislead anyone it will give any bad informationI'm gonna suggest that if you don't know what those document are, that you google them or they should payan accountant or somebody to go through and help you put those together.

what I will say is that when you put this together you really want to be sure you have your ducks in a row and then just as important as as having all that information ismaking sure that the information is real.

do not exaggerate your numbers in yourbusiness plan it doesn't do anyone any good.

let's say,for instance, that you are launching an actual productat retail, and haven't fully defined the cost goods yet.

don't say that you can get thispart for five cent when, in the end, the average price is $.

25 but you're sure you can find a vendor.

no!you need to be conservative with your numbers it doesn't do you any good to look backat these numbers a year from now and realize that you missed the markcompletely because you were not conservativeenough when you put this document together.

and let me tell you it's even worse if it happens to your bank or an investor, who's looking back a year from now and saying why are you so grossly off in yournumbers.

And it's really because you put together a pie in the sky financial section.

do yourhomework here do with a financial professional if you don't have one onstaff hirer one, and put together a real snapshot of the financial viability ofthe company.

So, let's move on to operations.

operations is really the peek behind the curtain atwhat the wizard is doing to keep Oz running.

and it may seemobvious to you how you manufacture whatever your product is.

but that's because you are the or you work for the entrepreneur, nor figure it out.

it's not obvious to anybody but you.

so explain how the product ismanufactured.

who were the vendors that you work with to get the product manufactured? talk about your warehousing.

Are you warehousing are you a taking control of inventoryand keeping inventory in a warehouse in your facility, do you have warehouses cross-country? are you and taking ownership at the port, wherever this is being made? all those details and again she like it that's just of course what you do, it's not obvious to anyone but you.

listen at in detail.

you also want totalk about how the product is being distributed.

so how's it getting from your warehouseto your retailer or your consumer? if youhave a B-to-B businesses, for a web-basedbusiness, some of the distribution andmanufacturing might not be relevant to you.

but if you are launching actual physicalproduct you really wanna be sure that it's clear what the pact markets is.

you cando that path if you wanted to you from manufacturing, from ideation, to time on shelf, it's an actual product.

You can even do it from ideation to close of sale, if it's not a physical product.

and then lastly you want to look at your organizationalstructure.

now of course you want an org chart and if your company's big enough for or chart.

Even if it's not, it probablyis a good idea to list out who ultimately reports into to who.

what's the hierarchy of the fewpeople that you do have? You want to list bios for anyone down to maybe a director level.

and and if a company is smaller thanthat, then you wanna have a bio for anyone who is key to the success in your business.

nowagain, if this is being written for investors is an importantpart they want to know that you have assembled a team of people who can get the job done.

who have a track record in the industry.

keep in mind you do not have to be thesmartest person in your business plan.

thesmartest person in the business plan is the person who was smart not smart enough to bring people smarter than them.

So list out anyone who is important to your businessin your organizational structure.

And that's really it.

there's not a lot of room for interpretation here so I don't have examples at how they would be written in thisvideo.

But I think you understand what I mean.

the last video are going to do is the executive summary.

as he discussedit's actually the first page of your business plan, but it's the last thing you write.

We're going to do that next.

hope you learned something.

I look forwardto seeing you on the next video.