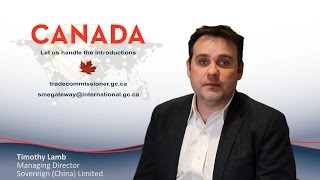 I worked for a company called Sovereign Group.

We’ve had a presence in the market since2003, and we work with foreign companies that are looking to understand the market better,as well as helping them with entering, setting up their presence, and then, also with backoffice support services.

I think Canadian SMEs, especially WesternSMEs that are looking to do business in China are especially looking to establishing a presencein China.

One of the biggest concerns that I see isbeing able to find senior management commitment, in other words, they have the internal resourcesor depth of management, that they can actually send somebody to spend time within the market.

And that may mean they spend six to twelvemonths here, helping with launching the initial presence within the market, and helping tounderstand the local employees you are hiring, but also looking at ways of better understandinghow you integrate your China operations into your headquarters as well.

So after a while, once you start looking atmoving into other countries, you are no longer going to be just a Canadian company, you arenow going to be an international company.

So thriving for and focusing on ways to integrate,and start looking at yourself in managing a company more like an international firm,is one of the greatest challenges we see of a lot of our clients.

So unfortunately what happens with many firms,in particular the ones that fail here, is that they have relied on hiring a local generalmanager, they formed the company and they just expect that this general manager willrun it themselves with very little supervision or contribution from the parent company.

And time and time again, this is typicallyone of the major reasons we see why companies fail within this market.

So making sure that you make the initial seniormanagement commitment, and not just the financial commitment, but the resources within yourcompany that you can also commit to the market, which is going to be very important.

After all, there is a reason why your firmis being successful in Canada and other markets, and part of that is your business culture.

And that is going to be a key component ofwhat you are going to adapt within China as well.

I would say that keeping a critical mind isgoing to be very important as well.

There is no such a thing as a China expert,although you may find many people represent themselves as one.

No one is able to understand everything aboutthis market, so it is important that you are looking at multiple resources to generatethe information that you need to make informed decisions within this market.

And that really means, not only foreignersthat are fluent in the language, but also local Chinese that speak English.

You might hire an engineer that is helpingyou with part of the business, but it doesn’t mean that engineer understands the tax codesor labor laws of this market.

And there is no reason why you should expectthat, as you would not expect that in Canada as well.

And I think that finally, time and again clientsencounter is this idea that “that’s how it’s done in China”.

And oftentimes, this phrase “that’s howit’s done in China” is something that is used essentially as a cut off and killswitch, in other words, it’s a way to end the conversation.

And in reality, it should really be the beginningof a conversation that should be where you are exploring why that happens to be thisway.

And that is something the SMEs that are lookingto enter this market should be really considering: how does this way of thinking or this behaviorthat I’m being told I need to follow make sense in terms of my business.

The Shanghai Free Trade Zone in its currentform was actually established in September 2013.

In fact, there was a free trade zone beforethat, and it was in an area called Waigaoqiao.

A Free Trade Zone is really an area that facilitatesand encourages export of goods that have been produced here in China.

But in 2013, the government wanted essentiallyto use the Free Trade Zone, expand it, and expand its mandate as well.

And in particular, they were looking at waysto use it as a laboratory to experiment with new reforms, reforms that they would eventuallystart introducing nationwide.

And in fact, that’s really what it has beenused for, for the past several years.

So a lot of reforms that have occurred, thathave been introduced in the Free Trade Zone, have now actually gone nationwide.

All these seem first initiated within theFree Trade Zone, but are now actually nationwide.

So the Free Trade Zone still is very effectivein terms of the government using it as a way to try new reforms, and also it is a placewhere they have introduced certain reforms in terms of industries that foreign investorscan engage without necessarily having a joint-venture with a local partner.