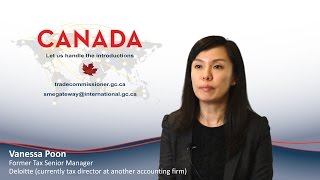 HK has a favourable tax regime, meaning firstof all it’s a territorial based tax system—only HK sourced income will be taxed in HK.

Relative for a lot of Canadians they wouldknow that as Canadian residents you’re basically subject to worldwide taxation.

Second of all, HK does not tax capital gains.

So, again, it’s a favourable option formany, particularly when they are disposing assets and investments in the future.

Repatriation is the key to many overseas companiescoming into the region.

Again, you want to be able to bring profitsback home.

Without withholding tax, it does make a hugedifference, because it greatly reduces your tax cost.

Fourth, HK, other than the Canada-HK doubletaxation agreement, also has an agreement with China.

The agreement it has with China is probablyone of the best double tax agreements that China has with any other jurisdictions.

Plus, the tax rate in the region, HK is oneof the lowest.

5% right now, whereasobviously another jurisdiction people would look at is Singapore, where we’re stilllooking at 17%.

Using HK is not news to many Canadian companieswho are interested in coming into the region.

HK becomes a desirable location for many reasons.

On top of all the good tax reasons, there’salso the non-tax reasons, including free foreign exchange control; the ease of setting up inHK; the amount of talent and resources you can recruit in HK… It’s easy to set up a company in HK, easierI’d say comparing to places like China where that could take 6-12 months depending on thetype of industry you are in.

So HK itself domestically presents a goodpicture and a very desirable location, and it’s a great choice to many.

The second advantage it has is the Canada-HKdouble taxation agreement that was signed a few years back and that agreement actuallytriggered a lot of interests from Canadian companies that we dealt with in coming intothe region using HK as a springboard into the rest of the region.

China itself does have a withholding tax.

With the Canada-China double taxation agreementor tax treaty, the withholding tax rate is 10%.

Using HK as a platform to invest into China,the advantage is that China into HK there is a withholding tax, but HK out back to Canadadoes not have withholding tax.

Technically speaking, when Canada investsin HK, you don’t have limits in terms of equity and debt ratios.

In a lot of countries they do have rules thatwill restrict interest deductions.

Again from a tax perspective, it’s importantparticularly when you’re making a lot of money.

You want to make sure that you’re matchingthe deductions.

HK itself other than China is actually expandingits treaty network as well.

Some people did have concerns a couple yearsback because the number of taxation agreements were limited comparing to, for example, Singapore.

As of March 2016, there were 34 tax treatiesand double taxation agreements in place between HK and other parties.

They’re continuing negotiating with otherjurisdictions and countries, meaning that they’re expanding their network.

The greater network means that overall inthe investment chain, the withholding tax would be lower.

Another interesting proposal that came outwas that in this year’s budget, HK has already committed to building itself as a regionalhub for corporate treasury centres.

Hence, why we always recommend Canadian companiesto take a look and see what your business plan is.

If you do plan to expand into China, or acouple of locations in the region, you do want to set up a holding company, for taxreasons, for business reasons, and HK is a very good option.